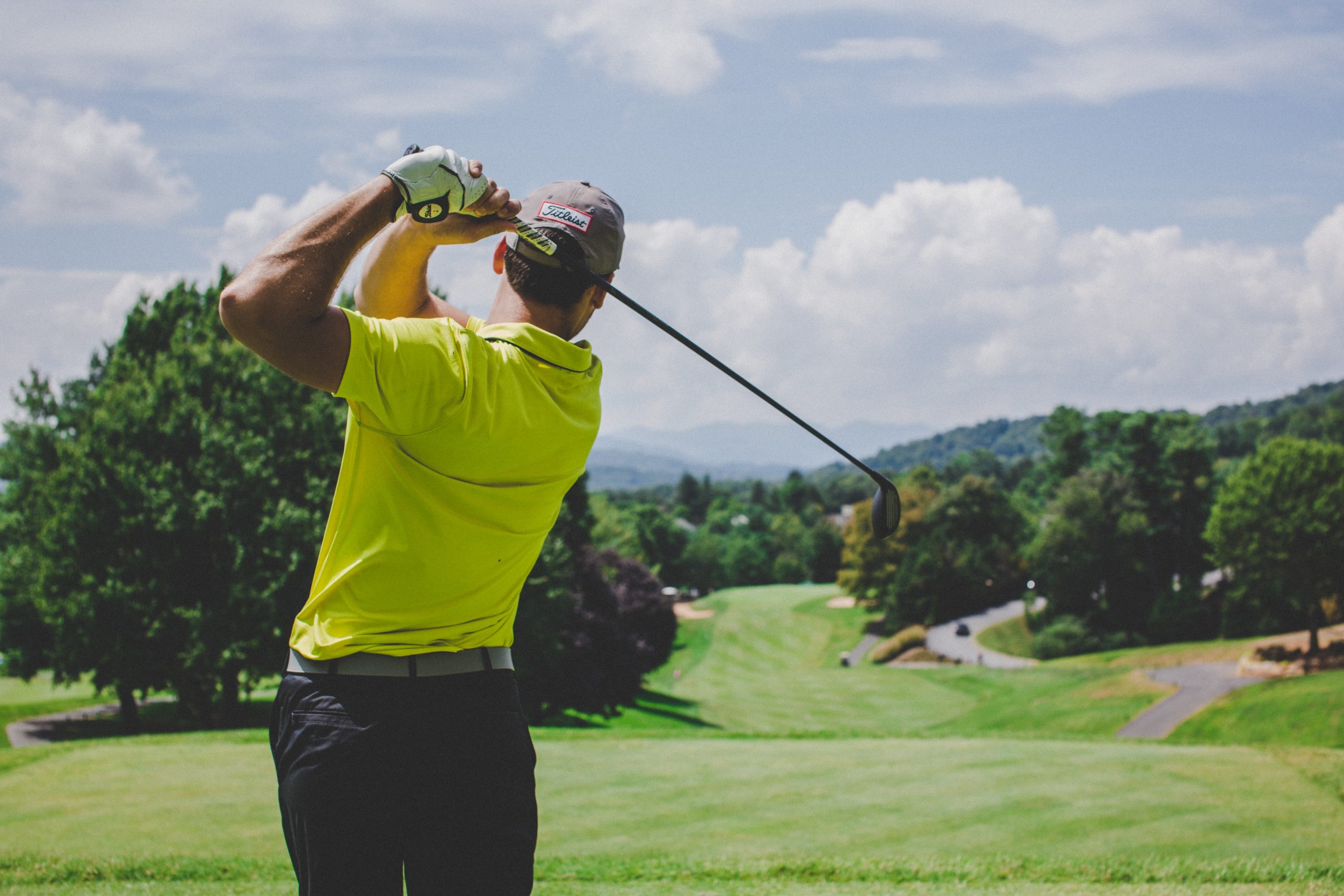 Ever-increasing amounts of big data in health care, data gathered through mobile applications, fitness data… It is considered an advantage that these data are automatically collected and analyzed using all sorts of analytical tools, machine learning, AI technologies, or data mining. Still, the human factor is the core of how effective and valuable the impact of data will be after it goes through all these transformation tunnels.

How big is big data?

To answer this question, let’s start with a few fun facts you probably want to try to remember and play a smart guy/girl in front of people you want to impress.

Probably you are wondering where all these data is stored:

This information is quite fascinating and scary. The collection of information is, in most cases automated, but what do data centers present? Can most of the data produced be just a waste mistakenly made by humans?

Let’s be clear; big data is an excellent resource that, by using different approaches to derive knowledge, creates new infrastructures to manage and curate information for communities.

Different methods, or let’s call them approaches, produce more innovation, but the spark of the invention becomes what the data does not say. Let’s take Henry Ford as an example. If he had queried big data for what his customers wanted, he would have to make “a faster horse” (rephrasing his famous saying).

This is where the human factor comes up upfront. Analysts design point of view, and using previously mentioned methods, information is extracted from large, diverse, and heterogeneous data sets. So in a world of big data, human blessings such as creativity, ambition, occasional humiliation, and wrongheadedness should be considered and fostered with care since our ingenuity is the Source of our progress.

Data is being analyzed for various purposes, to define trends, projections, predict problems, and in various industries, such as sports. Have we ever stopped and asked ourselves how the commentators at matches manage to make sports more fun for us viewers to watch and listen to? Behind the scenes, big data plays a significant role in making sports more competitive for both players and viewers. The use of big data in sports is, of course, not a new thing. The 1990s can be cited as the beginning of the introduction of data analytics into the sports industry.

Golf is the perfect game for data analysis. There are so few obvious factors that the player can influence, so the interference of technology, which can explain and offer a combination for the most optimal game, makes perfect sense.

I have just started playing golf and let me tell you that this game is a giant and the thing I like the most about it is that you don’t play golf against other players, you compete against yourself every time.

Now, let’s take a second and look at this picture: 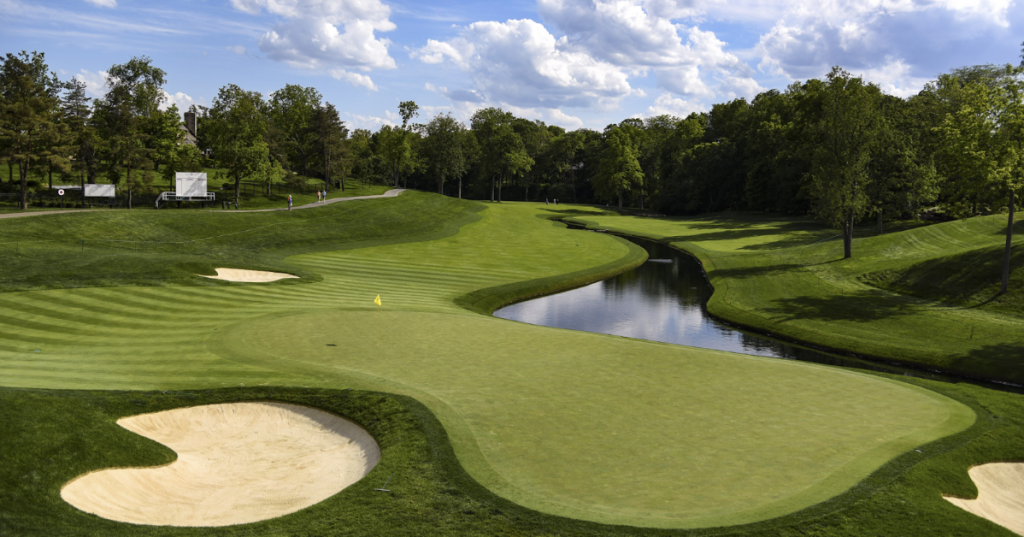 It may look peaceful, but it is a true battlefield and a great source of raw data when the game starts. To be clear, I am not expecting you to know golf rules, but a little introduction on this subject won’t hurt.

So here we go – golf dates from the 15th century. A little has been changed regarding rules, and the goal is – to throw the ball into the hole with as few strokes as possible. Winston Churchill once said:

“Golf is a game whose aim is to hit a tiny ball into an ever smaller hole, with weapons singularly ill-designed for the purpose.”

This sentence accidentally defines a huge number of problems or, better say, different factors that can affect the swing of a club, kick and flight of a ball.

When you think of golf, you usually don’t think about lasers and devices, but technology is now an integral part of the PGA tour for the fans, players and broadcast.

Data analytics has become part of professional golf since 2003, and big data as a concept has become part of this world in the last few years. What happened? Well, the system ShotLink was introduced. Before, there were various forerunners of ball-tracking systems, but ShotLink allowed users to break every player’s stroke and to describe it by defining a sequence of different attributes.

Take your game from guessing to knowing

The technological revolution has brought many different gadgets, devices, and golf applications, with the help of which statistical analysis can be performed. The results are used to improve the game, coaching as well as overall experience of the sport.

The most important aspect of golf is the swing. ShotLink captured 225 terabytes of data in a study conducted in 2016, and the world of golf learned a lot from it. Studies showed that movement of your hips and shoulders separates exceptional players from amateurs. It is a complex synergy of muscle groups that provide biomechanical prerequisites to transfer the swing energy to the ball.

This is where devices such as TrackMan or KeyMotion also come in line. By using HD cameras that monitor granular variations of a swing and microwave transmissions that reflect from the moving golf club, they capture data and create a story of what happens during the whole life cycle of a swing.

Using features given by ShotLink, PGA tour got 174 million shot attributes and 80,000 hours of video in the last 20 years. It followed spin rate, ball speed, and all characteristics of a swing such as angle of hips, shoulders, vertical launch angle, etc. 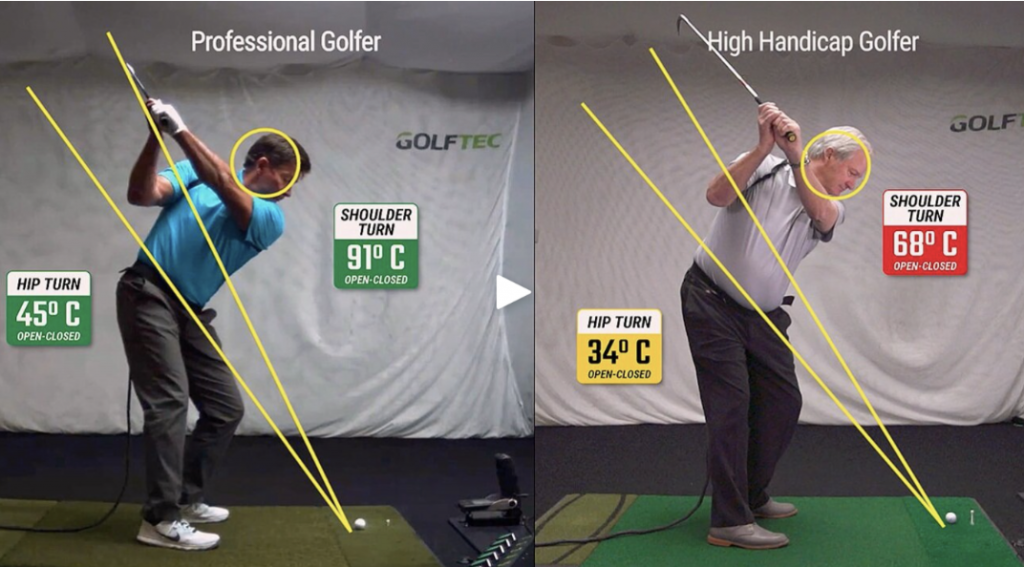 So now, how are statistical conclusions applied to the life of a pro golfer?

In recent years, many pro golfers started closely cooperating with data analysts. Brandt Snedeker embraced technology and was the first golfer to hire a full-time data analyst, while Dustin Johnson started studying his and opponent’s game when he was in 166th place in wedge game in 2012. After discovering his weaknesses using a high-tech Trackman device, he applied corrections to his short game. He reached 4th place in 2016.

Data analysis has become an important tool in golf practice, just as trainers are. It opened the eyes of the world of golf, and now it seems impossible to return to traditional golf, where the player relies only on his experience and muscle memory, without knowledge of his optimal game.

Let’s look at some data

Golf is a game of calm and quiet players, which lasts for several hours, and some may define it as slow. The speed of the game is affected most often by the players we play with because they are searching for clubs, talking, using the phone, etc., as well as groups of players that we caught up with on a hole because we play at a faster pace for us or, on the other hand, they played slower. But how much this slowness affects the quality of the game?

A small study was conducted using data collected by Arccos. Here is the input that was observed:

Substantial here to understand is the term handicap, a value representing a player’s ability to play, and it compares with other golf players. The lower the handicap, the better the player. Here are the results: 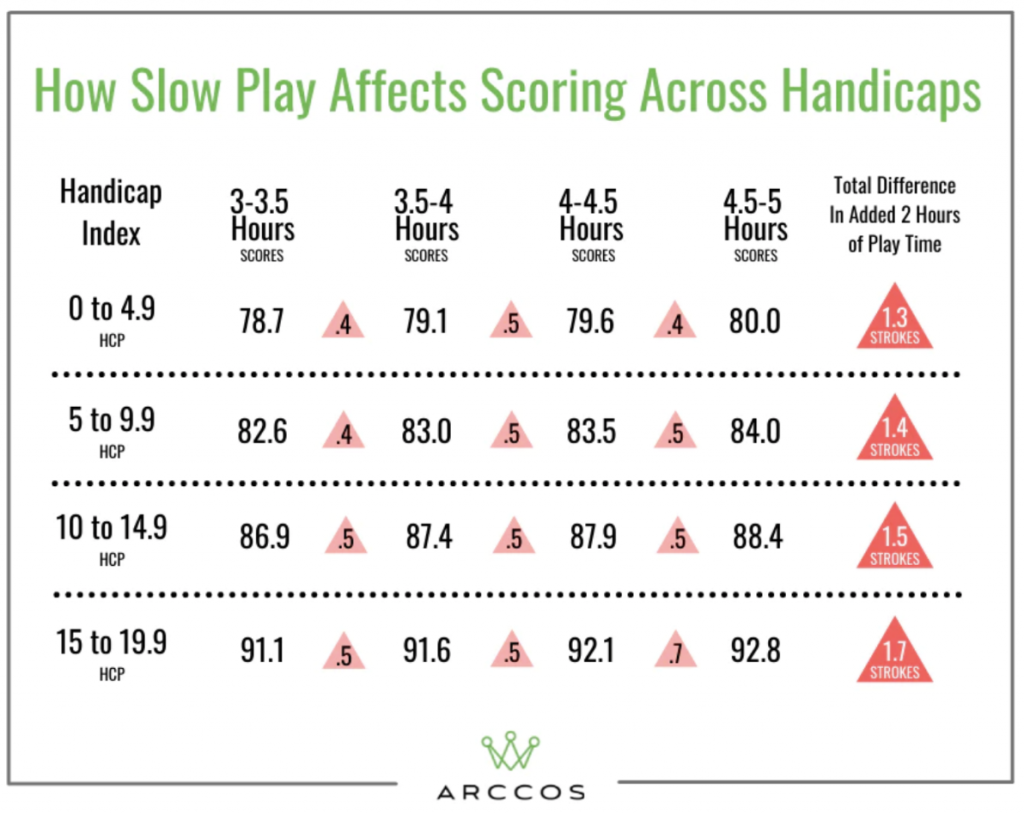 At first glance, the collected data show that as the period during which the game lasted increased, the results worsened regardless of the handicap. No matter how experienced, every player is affected by the slow game. Of course, those with a greater handicap make more mistakes than those who are more skilled.

Bobby Jones said, “Golf is a game that is played on a five-inch course — the distance between your ears.” This conclusion can direct us to become aware that our performance, not only in sports but generally in life, is mainly affected by our nervousness and impatience. It is undoubtedly one thing we can learn to control.

And while we try to overcome ourselves, let’s agree on how the increase in the volume of data is improving the power of analytical and predictive tools that point out our mistakes as well as the ways to optimize our jobs, hobbies, and everyday life in general.

Make it work, then make it fast Atlantbh had the opportunity to implement a back-end software solution for an insurance company. The client required a data processing engine able to transform different sizes of data varying from a few kilobytes to dozens of gigabytes, using the same mechanism. Having a…
Atlantbh 0
Love3
Big DataBlog
August 10, 2022

Ever-increasing amounts of big data in health care, data gathered through mobile applications, fitness data… It is considered an advantage that these data are automatically collected and analyzed using all sorts of analytical tools, machine learning, AI technologies, or data mining. Still, the human factor is the core of how…
Tanja Micic 0
Love3
Big DataBlog
December 1, 2020

Introduction Hadoop as a platform enables us to store and process vast amounts of data. Storage capacity and processing power are directly related to the size of our Hadoop cluster and scaling it up is a simple as adding new nodes to the cluster. (more…)
Emir Arnautovic 0
Love0