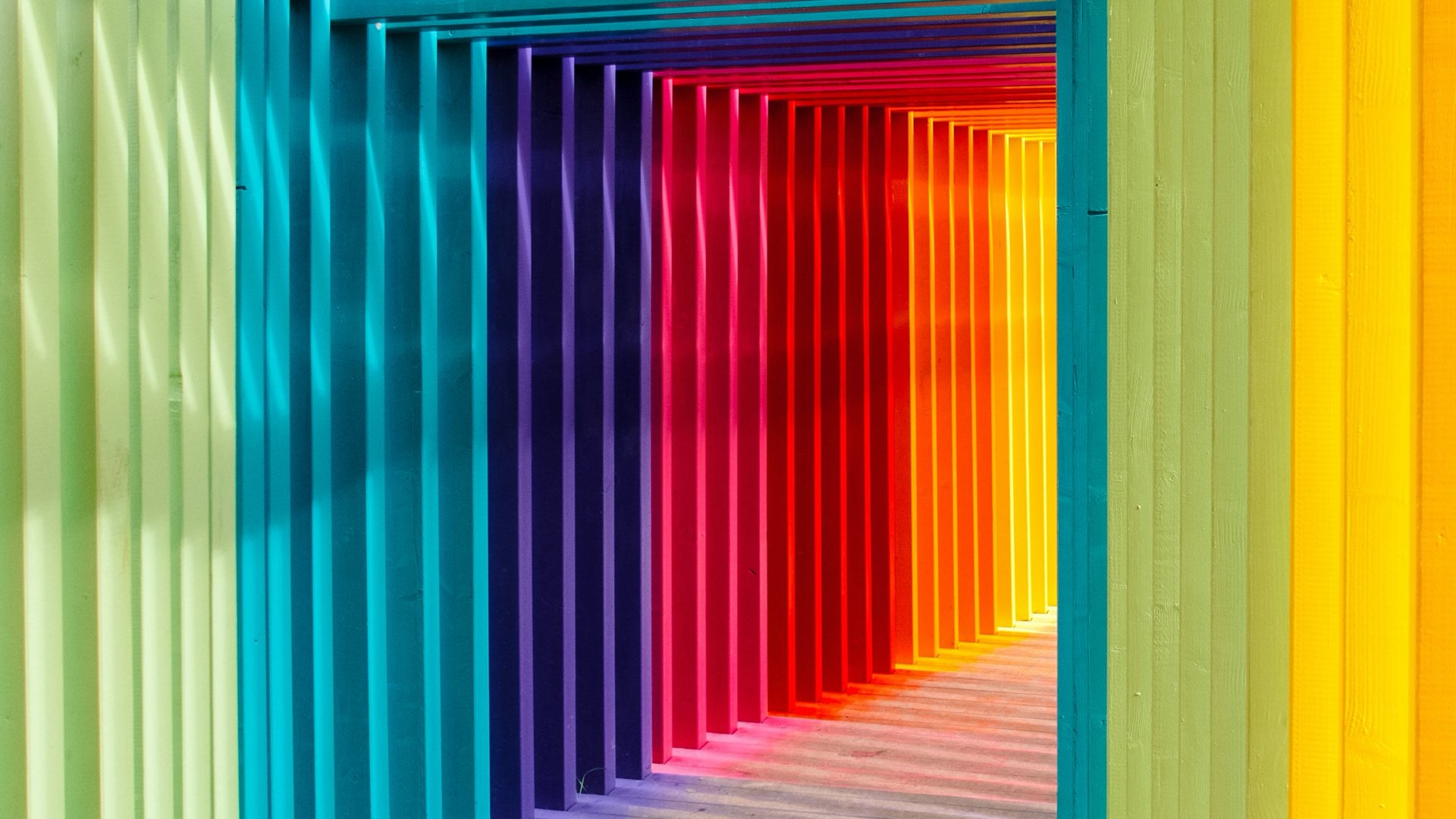 After static image processing proved to be useful in our everyday automated regression testing (read about it here), we decided to cover more complex UI issues using visual testing concepts. Many applications in our company contain dynamic (interactive) UI elements, which have to be checked manually each time new features are added.

The best way to picture such an example is to expand our previously explained case where the application contains map functionalities. Instead of using a static image as a map and map layers preview, we can use interactive maps, which are not static by any means. Such an example can become tricky to automate, as interactive maps are not static images (they can take time to load, and their components can have some offset in preview depending on service you are using). Even though you can play around scaling images or setting some specific time for taking screenshots, these tests will become flaky over time, and you will end up having too many special cases and complex code to maintain. Also, real nightmares start when you have multiple browsers, devices or headless mode to run your visual tests, as image comparison depends tremendously on screen resolution. Therefore we contemplated a new way to handle such situations. The optimal solution in our case was to combine functional and visual testing paradigms to avoid manual testing. The ultimate goal was to be sure at any time that maps, markers, and map layers are loaded. Other UI components linked to maps (modal titles, map description, or legends) could be automated using standard regression testing (via HTML elements check).

How to automate interactive visual elements?

We found using the dominant color algorithm, in combination with processing screenshots, as the most effective way to overcome issues with interactive elements.

Following flow proved to be successful for our test scope:

This method does not give information if maps are always loaded identically – which is the main criterion for static images. The valuable information we get from this method is if the map is loaded at all, and if its layers appear every time they are supposed to. This method saved a tremendous amount of time we spent manually checking if our map services work as expected (as some of our applications rely very much on maps and similar geo-services). Also, we found this method useful if the application contains some kind of ads (especially video ads), which helped us get away from the situations where our links were broken and we did not notice it on time. 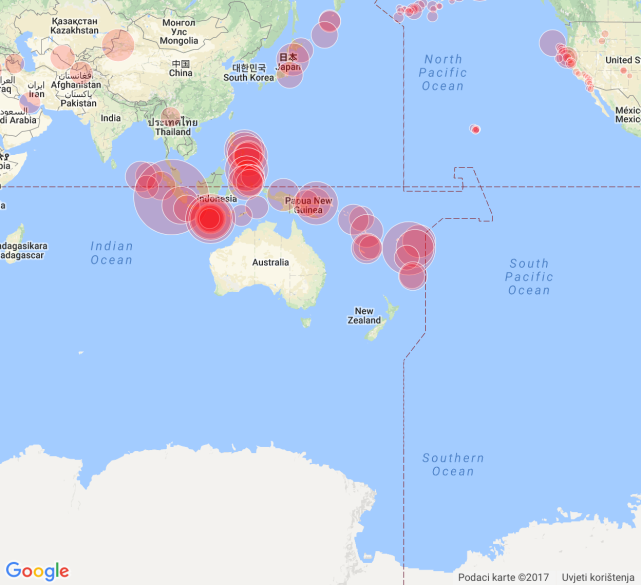 Before we dive into algorithm details, we will show you how it is used for testing purposes, on a dummy map example. The image below shows a base-map with red circles showing the intensity of earthquakes in certain geographic areas.

Those circles represent the map layer. For the purpose of showing dominant color algorithm usage, we set up the following scenario: 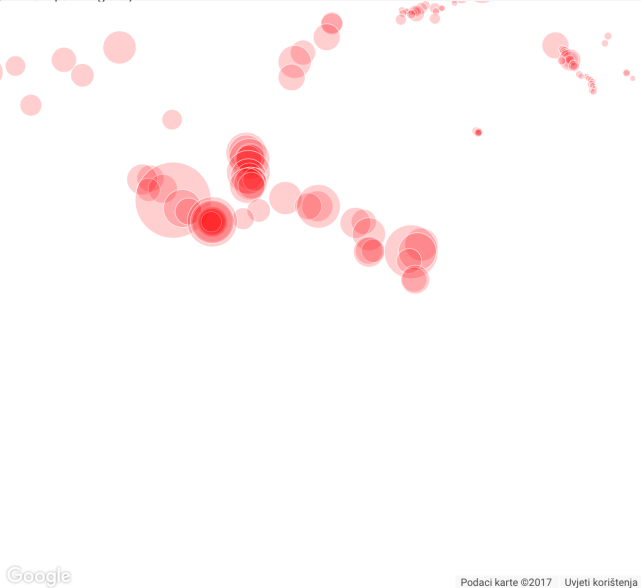 All steps regarding test implementation will be explained in the following sections.

Identify an area of interest and save it as an image

Similar to the still image identification, we used Watir to identify where our maps are shown (we are fetching element location via Watir XPath wrapper). RMagick method from_blob() in combination with resize_to_fill() is used to manipulate saved image so that it is resized to fill certain resolution. Such a normalized image is saved in the desired folder.

Use image quantize method to extract N most dominant colors

After the image is saved, that image should be quantized. Quantize method is used to reduce image colors to N most frequent ones, by using the RMagick quantize() method. This is the first method used to implement the dominant color algorithm.

Another method from the mentioned algorithm is used to manipulate the quantized image. Color histogram is created from such an image, and that histogram is sorted by decreasing frequency. color_histogram() method from RMagick is used.

The histogram we created from our example can be seen here:

To be able to create an assertion for our tests, histogram colors are converted into hexadecimal values. Those values are created using the to_color() method which converts any pixel color to adequate colors using All Compliances.

Finally we can check if our color histogram shows any other colors then white (#000000 in hexadecimal notation). If this is not the case, that means that our layers are not loaded, and the test will fail.

Output of the test:

In previous steps, we described how the dominant color algorithm is used in our scripts. Now we will show algorithm methods we used for testing (complete algorithm can be found here):

When to use algorithms in visual testing?

Diving deep into image processing algorithms, to be able to use them in visual testing, can be seen as to much work and to little value for QA team. This is true in case you have few images to check, or simple application to test. But when you have complex business logic or complex application, where there are intense sets of rules for image presentation and appearance, this kind of tests can be of great help and also time-saving. In our case it was worth the effort as we:

Having all this in mind, it is up to the QA team to decide if they are willing to dive into such adventure and if the output is good enough to replace manual testing.

In our blogs regarding UI testing, we explained two methods that proved the most efficient for our automated visual testing. Those methods can be further expanded to test whole pages. Also they can be combined to get more precise and more stable tests. Our future goal is to create a whole visual test suite that will be reliable as much as our standard regression tests are. Previously explained algorithms set us on a good path to achieve these goals.